We get phone calls almost every day from someone who is trying to figure out whether a certain latch will work on their gate.

“You know that thingy at the end of the doohickey?”

This post will put a name to all the parts. The photos below show the hardware that would be installed on each side of the gate.

For an in-swinging gate

For an in-swinging gate, the latching mechanism will be installed on the inside of the gate. For the dark bronze latch shown below, you’ll have the latch, the limiter, and the receiver or strike.  This is a right-handed latch sample; note the far end of the arm is pointing to the right. On the outside of the gate, you’ll have just the ring handle on the plate. The gate latch set also includes a metal spindle, which is a rod connecting the two sides of the latch. The spindle is cut to fit the thickness of each particular gate. 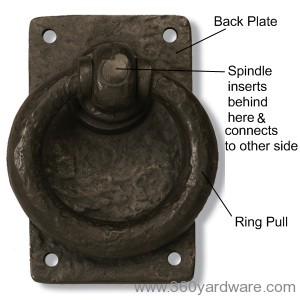 For an Out-Swinging Gate

An out-swinging gate will have the exact opposite installation as what’s noted above, but everything works the same.